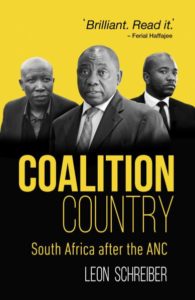 ‘We are on the cusp of a momentous change. The ANC has governed South Africa for more than two decades, but its iron grip is slipping. For the first time since 1994 there is no guarantee that it will retain power. If ANC support drops below 50% in the 2019 elections, the political landscape will be transformed dramatically: we will be governed by a coalition, and the consequences will be felt by everyone. One of South Africa’s brightest political minds, Leon Schreiber, explores the myriad possibilities – and consequences — of a coalition country. A must-read for every South African who wants to prepare for his new reality.’

Dr Leon Schreiber is a Senior Research Specialist for the Innovations for Successful Societies Programme at Princeton University in the United States, which conducts research on how to build effective and accountable governance in developing countries. In 2017, the Mail & Guardian named him as one of its Top 200 Young South Africans. He regularly participates in television and radio programmes as a political analyst, and writes for some of South Africa’s leading newspapers and magazines.

‘Coalition Country paints a fascinating landscape of a possible new politics. It holds both opportunity and threat. Brilliant. Read it.’ – Ferial Haffejee

‘Gripping and insightful. This is a bold, scientific guide into the untraversed terrain that lies before us.’ – Mondli Makhanya

About Coalition Country:  South Africa after the ANC. Tafelberg [online].

How A Coalition Government Could Actually be a Success in SA. Martin Schaefer, German Ambassador to South Africa, Huffington Post, 5 May 2018.

DA in pole position to lead SA into the coalition country it will become. Leon Schreiber, Business Day, 4 April 2018.